I do like pizza, perhaps I like it a little too much even! So the other night while we were eating pizza I decided I would make it my next felt food tutorial! (When my boyfriend came down he thought it was a real pizza slice at first!)
Instead of a tutorial to make a whole pizza (since there are plenty of them out there) I am just doing single pizza slices.

Step 1
Print off the pattern above and cut out 2 base pieces from beige felt, 1 sauce piece from red felt, 1 cheese piece from yellow felt and topping pieces depending on what pizza you like best! 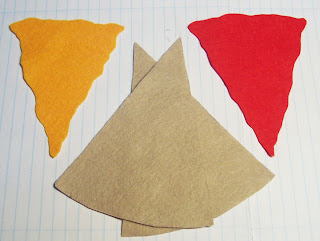 Step 2
Take one piece of pizza base and sew on the sauce felt piece using a simple running stitch.
(The sauce piece wants to be placed as close to the bottom point as possible.) 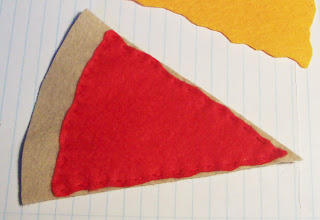 Step 3
Now sew the cheese felt piece on top of the sauce, again keeping it close to the bottom point as possible. 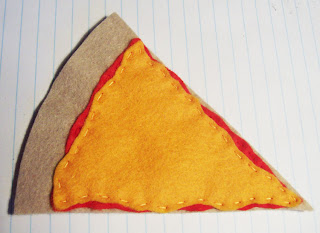 Step 4
I decided to make a pepperoni pizza, but you can pick different toppings. Sew your toppings onto the pizza, and don’t be afraid to cut them a bit smaller as if they are over the edge and got cut off while slicing up the pizza. 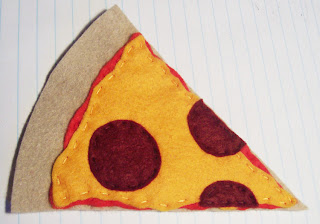 Step 5
Now take your other pizza base felt piece and pin it to the back of the piece we just sewed everything onto.
Sew along the sewing line that was marked on the pattern (this should run right long the edge of the pizza sauce). 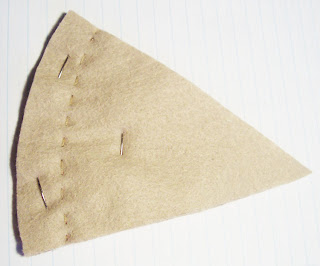 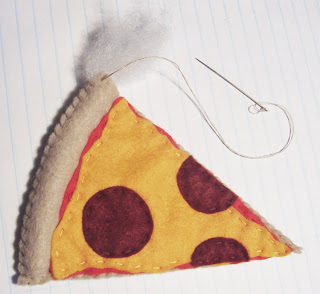 Your pizza slice is now finished and ready to (play) eat! If you make 7 more slices then you can have a whole pizza to enjoy! And you can always experiment with different toppings!

This site uses Akismet to reduce spam. Learn how your comment data is processed.

You can find out more about which cookies we are using or switch them off in settings.

This website uses cookies so that we can provide you with the best user experience possible. Cookie information is stored in your browser and performs functions such as recognising you when you return to our website and helping our team to understand which sections of the website you find most interesting and useful.

Strictly Necessary Cookie should be enabled at all times so that we can save your preferences for cookie settings.

If you disable this cookie, we will not be able to save your preferences. This means that every time you visit this website you will need to enable or disable cookies again.